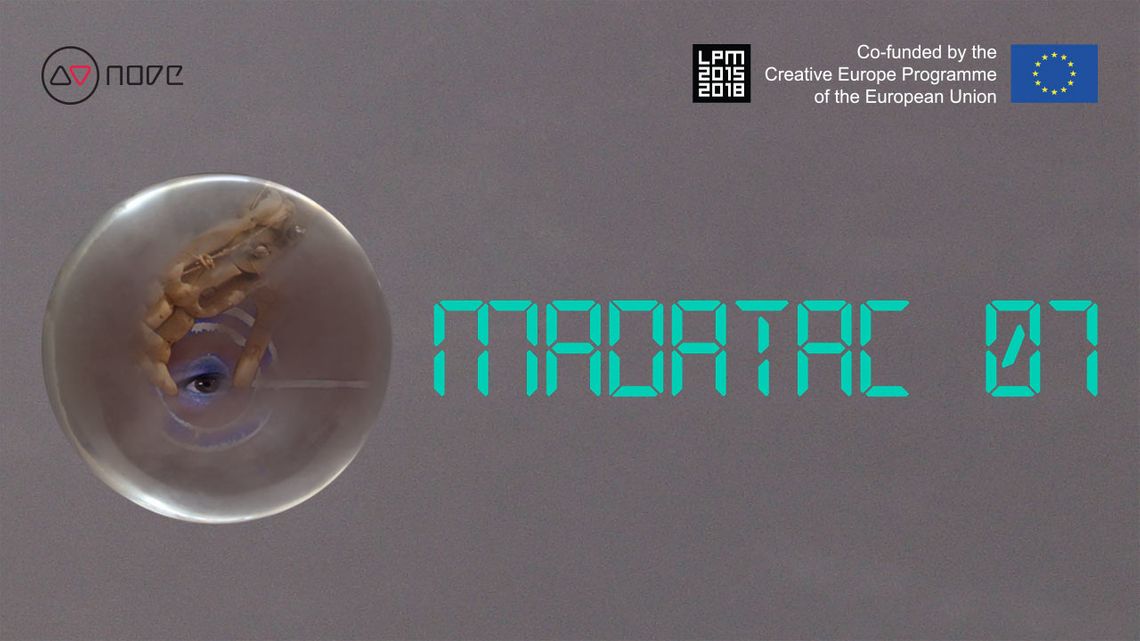 From 20 to 24 January, Madrid will become a platform of video art and new media with Sample Digital Audiovisual Arts and Technology Acontemporáneas (MADATAC), which this year celebrates its seventh edition with the title “Art for a quantum of time “, having poured in Spain with-a benchmark of digital culture and the most experimental art. More than 120 video artists from 30 countries will showcase the most innovative, risky while origi-nal and poetic currently being done at the level of media art worldwide, through exhibitions, screenings, lectures...[Texte disponible uniquement en anglais] “Art for a quantum of time “

From 20 to 24 January, Madrid will become a platform of video art and new media with Sample Digital Audiovisual Arts and Technology Acontemporáneas (MADATAC), which this year celebrates its seventh edition with the title “Art for a quantum of time “, having poured in Spain with-a benchmark of digital culture and the most experimental art. More than 120 video artists from 30 countries will showcase the most innovative, risky while origi-nal and poetic currently being done at the level of media art worldwide, through exhibitions, screenings, lectures and talks, performances interactive, videoins-installations, audiovisual concerts and workshops taking place in CentroCentro Palacio de Cibeles, Circulo de Bellas Artes and Complutense University of Madrid thanks to the co-financing of Europe Creative European Community 2015-2018 (Avnode) Program. From an interdisciplinary perspective, and merging the world of art with imagination, MA-DATAC defies conventional cinematic narrative offering the transformer audiovisual art, in a bid to risk and beauty. Not surprisingly MADATAC has recently been recognized by an international jury in Brussels for the 2015-2016 EFFE distinction as the artistic quality of the shows and have a significant impact locally, nationally and internationally.

For Festival they have passed personalities like Roy Ascott, Roman Gubern, Lech Majewski, Mabel Palacin, Reynold Reynolds, Bernd Lintermann or Brian Eno, among many others, and she is linked figures as Abbas Kiarostami or Bill Viola. MADATAC disseminates new media art and the most unprecedented, unclassifiable and visionary video art, one that promotes the art of seeing the unseen. One of its purposes is fomen-tar a new exhibition circuit and procurement to serve as a quarry of both emerging video artists as great weight, both national and international, which are involved in joint innovative proposals aimed at stimulating new languages ​​of Motion picture and working with tools of the new digital media. MADATAC is thus an independent international festival with an open philosophy, framed within a universal, free access educational and commitment, and focused on experimental art. A real, virtual and itinerant laboratory where artists can pre-set to the general public, critics, curators, collectors, academia and students as well as other artists, his latest creations.

Competitive International Official Selection MADATAC 07 shall consist of the works of 50 artists from around the world, selected from a pool of more than 400 pieces of video art presented, which can be watch on the big screen in the auditorium of CentroCentro at the Palace Cibeles headquarters MADATAC thanks to Ayto. de Madrid, and the best work of video art award prizes and four honorable mentions represented in the categories of “most promising video artist” “most innovative digital work”, ” videoaural better interaction “and” Special Jury Prize “. In addition, this year has also created MADATAC MADATAC AWARD OF RESIDENCE production of a work at home for 3 months Velázquez and prize of 3,000 € for the costs of maintenance and production of the piece of media art / video art, which he has been awarded the Mexican artist Adrian Chavez Regnier. MADATAC, working with Alcala Subastas Segre and Auctions, has also become a pioneer in Spain in video art auction during the last editions, a stimulus to boost the internationalization of visual art-ing.

The highlight of Scotland, Germany, Taiwan and Egypt

Also, the “Monograph” section will offer the public the privilege of enjoying a tour through the selected works of important festivals like Papay Gyro Nights Scottish Art Festival, a selection of 14 works belonging to the Inter Media Art Institute (IMAI) Dusseldorf, one of the leading international dedicated to the distribution and conservation of works of media art insti-tutions. Since its inception, also and continuously, MADATAC sections in each issue opens for cen-trate on videographic and audiovisual production from different countries, cultures and territories. In this issue Taiwan is a dynamic center of creation of new media art, which will provide a jump-vo quantitatively programming shows with a variety of artistic and participants ReaFIR-man proposed that the existing links between society and cultural MADATAC Taiwanese. Including a compendium of work emerging Taiwanese artists working throughout the world and in which dif- ferent aspects of life are addressed through the tam-tam ART, an association dedicated to international cultural exchange and promotion of art Taiwanese modern and contemporary art platform of the new ASC means that customizes experimentation, creativity and exchange visitors, radical promoting art and culture through communication, exhibitions and events that break the ba-riers sociopolitical and propose alternative views. Also form part of MADATAC your section “uncharted territory”, which each year shows the visual creations of cultural antipodes, will focus on this issue in Egypt (Festival video, video art and experimental cinema) and Malta (VIVA Festival).

Interactive installations and audiovisual concerts
In the section of performances and installations, MADATAC opens with Skin, CLAUDIA ROBLES, which offer visitors the opportunity to use a bio-interface (GSR) that measures the Galva-unique skin resistance to measure their physical arousal or to different psychological factors; S FOR SISYPHUS, a video (play) interactive art IP YUK YU Hong Kong artist on the myth of Sisyphus by Albert Camus through which attempts to explore the human intentionality and action thanks to all ani-mada and fun experience; Affective Swiss JAN TORPUS Environments, a work of art new interactive media com-commissioning of a VR environment, audiovisual and installation of robotic creatures that seeks to investigate posi-bilities to interact with an artificial environment affective way, including cognitive processes and decision; Between Being Asleep and Awake Taiwanese CHOU Tung-Yen on the proximity and the fact of estrangement between the internal dynamics and the outside world; Generative Animation Czech JAKUB PESEK, with objects generated digitally on an analogy with human thoughts, only shining before disappearing into the unconscious; Angels, Giordano Tribute to Patxi Araujo, one soft-ware entity establishes a two-way dialogue between image and sound, created from the dynamics of a system of particles; and Energy Chamber: ResoAura group of artists from Hong Kong XCEED, a three-dimensional kinetic installation that resonate at different frequencies of speed and so-nest to create a specific model of energy.

Furthermore, in terms of audiovisual concerts, a luxury program by ADDICTIVE TV, the duo of DJs Audio / Video UK mixtures known film clips and their crea-tions with its audiovisual material, with his new project,Orchestra of Samples; jam sessions of more than 200 musicians in more than 20 countries; FRANCK Vigroux & KURT D’HAESELEER and his proposal of an entire trip postdigital Anthropocene, inspired by the emerging idea that the human impact on the world and the weather is so great that we have entered a new geological era, a whole ‘ ; ‘a virtual populated by creatures and mutations cloned species artificially contaminated with DNA reconstructed world safari LIEN-WANG CHENG, with its interactive devices applied to the sound of the performance; luxury and closing by two artists regarding the panorama of sound and video in Lithuania: Vytautas V. Jurgutis and Vaclovas Nevcesauskas: METROSCAN, an audiovisual concert based on a purely digital aesthe-ca where generate visual structures and images that interact with a sophisticated electronic music-da.

Having counted on figures like Roy Ascott , Brian Eno, Claudia Giannetti , Derrick de Kerckhove , Ed -ward A. Shanken , Robert B. Lisek , etc., the IV Symposium Cibercultura & New Media Arts MADATAC raps tare the most part Sample intellectual . A contact point between the academic and the experimental that , this year , Madrid will bring artists from the largest international network of video art, Avnode ; and theorists and artists such as Juan Martin Prada , Jan Torpus , Renate Buschmann or Raphael Vella.

Among the parallel activities , a unique workshop of Pure Data ; submitting winning play of the third edition of the Essay Prize MADATAC , Art and Robotics . Technology and aesthetic experimentation Ricardo Iglesias García ; and a lecture at the University Complutense by Ho Weiming entitled ” Transdisciplinarity and new media art in Taiwan.” 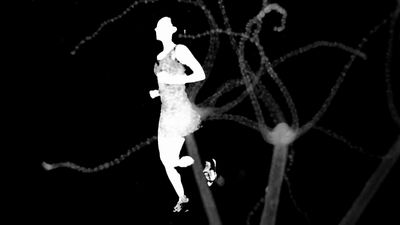